This is a rare Home Country Gig for the Aberdonian Duo of Guitarist and Singer Songwriter, Steve Crawford, and legendary Harmonica Player, Spider MacKenzie. They are Big in Europe, having made the step up from the club circuit to larger venues. Now based in Germany, Steve Crawford has established himself on the Music Scene there, winning a Best Folk Album nomination in the prestigious Critics’ Awards for his work with Fiddler, Sabrina Palm; also playing with popular Cajun band, Le Clou. Spider MacKenzie is the go-to Harmonica session player for many other musicians on both sides of the Atlantic. Christine Albert, the former Chair of the organisation, which stages the Grammys, commented about Spider – “It is rare to come across a harmonica player with such a genuine empathy for American music. He is an incredibly talented musician”. Steve and Spider’s most recent Album, Celticana, recorded in Austin, Texas was described by Folking.com – “As good a combination of vocal, guitar and harmonica as you’re likely to hear, decorating songs that remind me of the quality and easy skill of early Jackson Browne.” Admission is £11 (Payable at the Door or tickets can be reserved by emailing kenneth@fivefurlongs.plus.com). 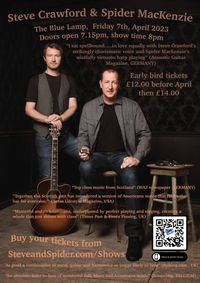 We are excited to be heading back to our favourite venue to play in our hometown. Door will open and 7.15 and we will be on stage at 8pm.

Steve Crawford & Spider MacKenzie from Aberdeen in Scotland make music that is at times rich in warm, candlelight intimacy and in others all burning hell fire and brimstone. Bold and eloquent songwriting, and delivery, often reminiscent of the classic ‘70s singer/songwriters, combines with acoustic guitar, wailing and weeping virtuoso harmonica and mellifluous vocals to complete this dynamic duo. As Germany’s WAZ newspaper simply put it, “Top class music from Scotland”.

To record their most recent album, ‘Celticana’, they relocated first to Nashville to rehearse in the city’s historic East Side, soaking up all the muse this musical heartland has to offer. From there they travelled on to Moon House Studios in Austin, Texas to work with veteran musician-producer and former Texan musician of the year Chris Gage. The result is music stylistically drenched in Americana set to lyrics that spin stories from the Scottish motherland.

Steve Crawford has featured his songwriting on numerous albums over the years including with founding members of Old Blind Dogs in the band Catford. More recently, his work with the band Ballad of Crows won praise from legendary folk hero Mike Harding when he said, “Listen carefully to the words, they’re making really great music”. Now based in Germany, he has also established himself on the folk scene there in his work with the popular Cajun band Le Clou and also in his duet together with fiddler Sabrina Palm, receiving a nomination for best folk album from the distinguished German Critics Award (Preis der Deutschen Schallplattenkritik) in 2019 for their second album, ‘Two’.

Spider MacKenzie is well established as one of the UK’s finest harmonica players. He is the go-to session player for many revered Scottish musicians - the late great Tam White, guitarist Andy Gunn and more recently UK Perrier Jazz Vocalist award winning singer Niki King have all sung his praises. Discovered by Stateside musicians as well, he has been called upon as a session player for a number of recording projects. Paying tribute to him, Christine Albert, former chairman of the Board of Trustees for the National Academy of Recording Arts & Sciences, the organization that puts on the Grammys wrote: “I feel that it is indeed rare to come across a harmonica player with such a genuine empathy for American music. He is an incredibly talented musician”.

Since the release of their first album ‘5 am’ in 2008 to great reviews (Scotland’s biggest selling newspaper The Daily Record awarded it five stars) the duo have gigged extensively in Scotland and across mainland Europe, with their first gigs in the USA in 2018.

“As good a combination of vocal, guitar and harmonica as you’re likely to hear, decorating songs that remind me of the quality and easy skill of early Jackson Browne” (Folking UK)

“Their music may be inspired and influenced by musicians on both sides of the pond, but it doesn’t actually come from anywhere. It’s already there. The music is embedded in Steve and Spider and they are graciously welcoming it to surface” (Texas Lifestyle Magazine, USA)

“Masterful and rich Celticana, underpinned by perfect playing and singing, creating a whole that just shines with class” (Times Past & Times Passing, UK)