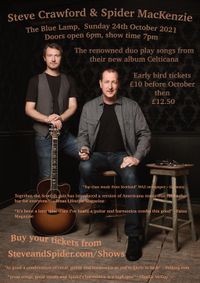 In 2019 to record their long awaited second album ‘Celticana’, they relocated first to Nashville to rehearse in the city’s historic East Side, soaking up all the muse this musical heartland has to offer. From there they travelled on to Moon House Studios in Austin, Texas to work with veteran musician-producer and former Texan musician of the year Chris Gage. The result is music stylistically drenched in Americana set to lyrics that spin stories from the Scottish motherland. The album was released in June 2020 to critical acclaim from press and radio. Tonight, the duo will play tracks from “Celticana” along with other favourites. The show was originally planned for 2020 but circumstances prevented this. They are super excited to once again be back at The Lampie.

"A fresh and upbeat collection, just what we need at the moment" - BBC Radio NAN GAIDHEAL

"As good a combination of vocal, guitar and harmonica as you're likely to hear" - Folking.com

"I just listened to "Celticana" with Spider MacKenzie and Steve Crawford. The CD is full of great songs, great vocals and Spider's harmonica is a high spot. Put an ear on this one. You'll be glad you did" - Charlie McCoy most recorded harmonica player in history, Grammy-winning, Country Music Hall of Fame legend.

“Spider Mackenzie’s harmonica emotes the feelings that emerge from the lyrics and music of Steve Crawford. Together, the Scottish pair has introduced a version of Americana music that raises the bar for everyone.” - Texas Lifestyle Magazine